THE OFFICIAL HOME OF DAVE BUTZ

Dave Butz was selected in the 1st round (5th overall) of the NFL draft by the St. Louis Cardinals in 1973, and was named to the league's All-Rookie Team that same year. He played out his option and later became a free agent where Coach George Allen of the Washington Redskins acquired him in 1975. The transaction between the Cardinals and Redskins is still considered to be the largest compensation deal in league history - the 'Skins gave up three future draft choices (two No. #1 and one No. #2 draft picks) in order to sign the highly heralded defensive lineman.

Only Sammy Baugh and Darrell Green played longer for the Redskins than Butz (14 seasons), a record shared with three others the decade before. He set the record (since broken) for playing the most games in Redskin history in October 1988. Butz finished with a total of 203 games as a Redskin, during that span rolling up the second-highest sack total in team history (62.5). 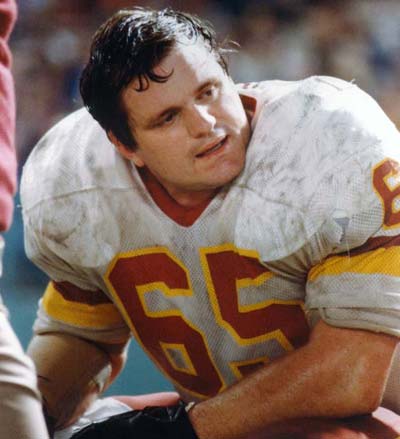 In nearly a decade and a half, he participated in 12 Redskin playoff games, 4 NFC Eastern Division title games, and 3 NFC Championship games. He was clearly the anchor of Washington's defensive line and a team leader over his long tenure with the team. Butz's legacy with the Redskins--his durability and productivity--resonate right up to the present day: he ranks third in most games played (203), third in most seasons played (14), and second in all-time quaterback sacks (62.5).

Butz retired from professional football in May 1989. Over a career that spanned 16 years, his conquest of the NFL was book ended by All-Rookie honors in 1973 and his third Super Bowl Title with the Redskins in 1988. Butz played in over 197 games straight as a Redskin.

* From 1973-1978, with the exception of one game in 1976, tackle statistics are not available.
** These statistical categories were not kept on record by the NFL until later in Butz’s career.

I've been blessed to have been recognized, awarded and honored throughout my football career.  I invite you to take a look at these accolades. Information and photographs may not be reproduced without explicit consent of publisher.